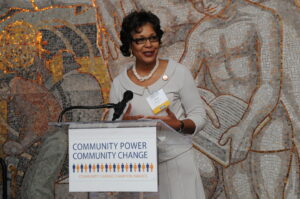 Arlene’s commitment to activism on behalf of working families has been a source of strength that has empowered her to overcome challenges and disappointments that might have deterred a leader of lesser mettle.

As a grade schooler in Fort Worth, Texas, Arlene Holt Baker revered President John F. Kennedy. So she was thrilled that her mother got her released from school to travel to the parking lot across the street from the Texas Hotel where she heard Kennedy speak briefly before heading off in his motorcade.

“There was so much hope vested there,” Arlene recalls. “Because we had a president who believed in making things better.” Arlene was back in school by noon, where she heard over the intercom that President Kennedy had been shot. “By the time I got to geography class, they announced he was dead.” It was Nov. 22, 1963.

Were hope the only thing Arlene had to draw on, she might never have risen through the ranks of the American Federation of State, County and Municipal Employees (AFSCME) as a grassroots organizer and area director for California to become the first African American Executive Vice President of the AFL-CIO. President Kennedy’s death was not the only tragedy that dashed her hopes in those early years.

Inspired to Serve Others

What caused Arlene to persevere through it all was the belief that helping others is a person’s highest calling, a conviction inspired by her mother, Georgia Louise Leslie, a domestic worker who never let Arlene and her six brothers and sisters dwell on the fact that “we didn’t have much. She would always remind us that others were worse off. She sacrificed to pay her poll tax, her church tithe and her NAACP dues, and she really believed in volunteerism.”

Throughout Arlene Holt Baker’s more than 30 years as a union and grassroots organizer, she has put her mother’s inspiration to work helping others help themselves through union representation and political activism.

As an organizer for clerical employees for the City of Los Angeles, she “learned what it really was to empower people,” she says. “Economic empowerment occurs through collective bargaining and having a voice at work.”

She shares with AFL-CIO President Rich Trumka a commitment to inspiring a new generation of union activism. “The future of the labor movement,” she says, “is young people. Our workforce today is dynamic – younger, more diverse, more people of color. The only way to grow a movement that has the strength that we had in the Thirties, Forties and Fifties is to tap into the energy and cultures of the emerging workforce.”

Arlene will build on her legacy of inspiring activism and reaching out to diverse communities to support the needs and aspirations of working people.

Holt Baker got her first job in high school through President Lyndon Johnson’s poverty initiative. Working after school at the $1.40-an-hour minimum wage, she made more than the $6 a day that her mother earned as a full time domestic worker.

She began her work in the labor movement with AFSCME in Los Angeles in June 1972, coincidentally in the same month that William Lucy took office as AFSCME’s Secretary-Treasurer, the first African-American to hold one of that union’s top offices.

Seeing his picture being put up in AFSCME’s Los Angeles office, her undying optimism was reinforced.

“I felt somehow that it was destiny to be there with an organization that believed in social and economic justice.”

She moved through the ranks of AFSCME and, as an organizer and international union representative, was successful in helping to organize public-sector workers in California and helping them win contracts that provided better wages and pay equity for women.

Visiting some of these workplaces years later, she saw how having a union contract had “given women the opportunity to buy first homes, first autos, to send their kids to college. It was uplifting.”

During that time, she was appointed by then-California Speaker of Assembly Willie L. Brown Jr. to serve on the Comparable Worth Task Force Committee and also sat on the board of directors of the Southern California Industrial Relations Research Association. She has received numerous civic awards for her work as a labor and community advocate.

She was an active member of the California Democratic Party, serving as a state delegate to the Democratic National Convention for the elections held between 1980 and 1996 and as first vice chair of the state Democratic Party from 1993 to 1996.

In 1995, Arlene came to the AFL-CIO as executive assistant to Executive Vice President Linda Chavez-Thompson. Working in 1998 for the first time with current AFL-CIO Secretary-Treasurer Liz Shuler, Arlene’s successes included the campaign to defeat the anti-worker California Prop. 226, which was designed to weaken the voices of union members in the political process. She also was instrumental in organizing labor’s massive support for the more than 20,000 migrant workers who pick and process strawberries in California, as the workers struggled to join a union through the Farm Workers.

As Assistant to the President of the AFL-CIO, Holt Baker became the first director of the AFL-CIO Voice@Work campaign in 1999. Holt Baker launched a dynamic movement to engage elected officials, clergy members, community leaders and others in support of workers’ freedom to form unions. In 2000, she ran the federation’s member education and get-out-the-vote effort in Philadelphia, Pennsylvania, and later coordinated the AFL-CIO’s Count Every Vote activity in the Florida recount.

Beginning in 2004, Arlene served as president of the nonpartisan voter education and mobilization effort Voices for Working Families, which registered and mobilized thousands of women and people of color to vote in under-registered communities.

She returned to the federation in 2006 to lead the AFL-CIO’s Gulf Coast Recovery effort. That work has included partnering with the AFL-CIO Housing Investment Trust’s Gulf Coast Revitalization Program and the Building Trades Gulf Coast Pilot Project to bring affordable housing and good jobs to people in the region – working closely with national and local advocates in fighting for the just rebuilding of the Gulf region.

On September 21, 2007, Arlene Holt Baker was unanimously approved to fill out the term of retiring Executive Vice President Linda Chavez-Thompson, becoming the first African American to be elected to one of the federation’s three highest offices.

Serving as Executive Vice President of the AFL-CIO, Holt Baker used her voice and her platform to advocate for the rights of workers to organize, health care reform, fair trade, immigrant rights, LGBT rights, voting rights, and the right for all union members to be able to fully participate in democratic unions that reflect the rich diversity of the workplace.